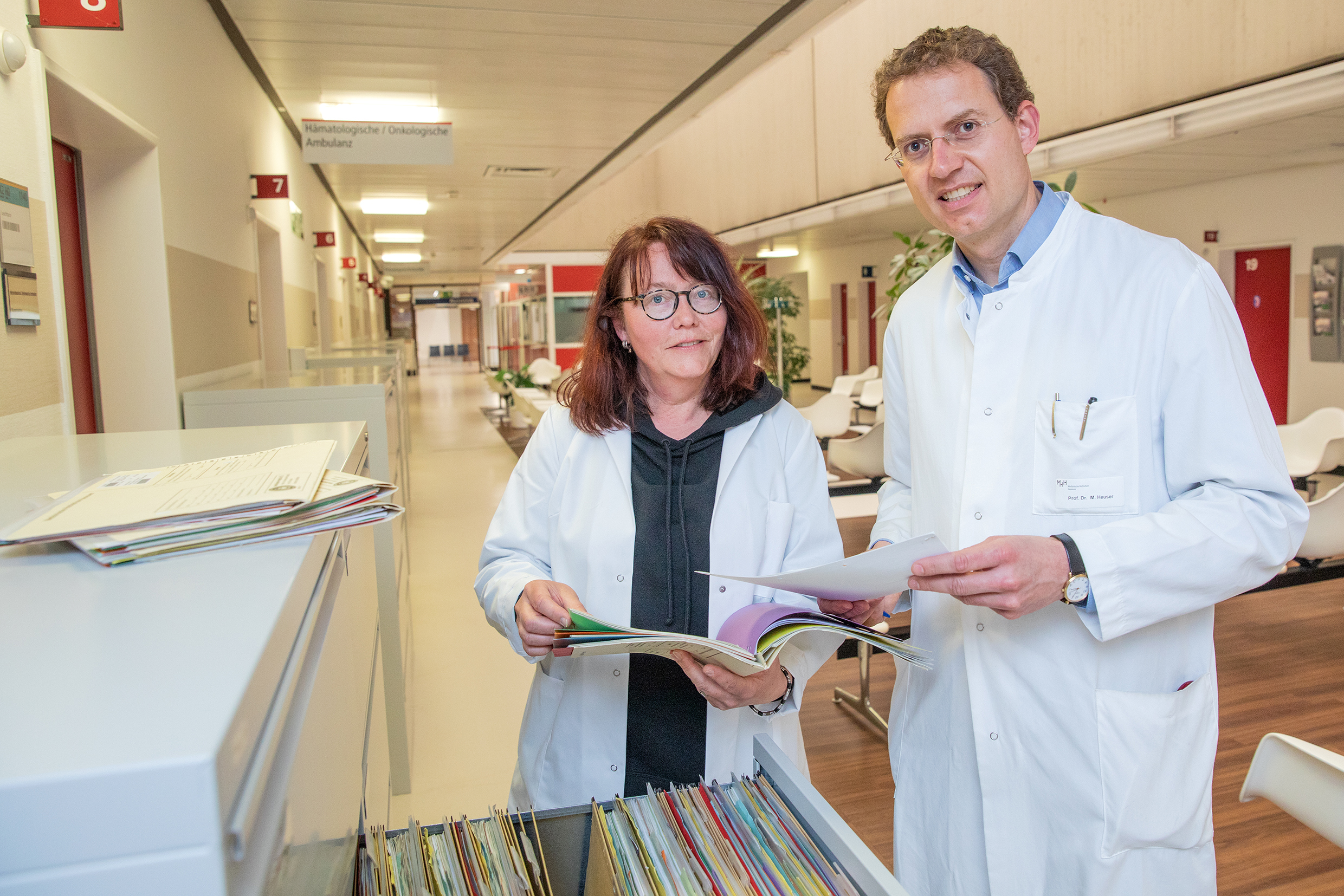 Acute myeloid leukaemia (AML) is a malignant disease in which the precursor cells of the haematopoietic system multiply uncontrollably. This form of blood cancer is caused by genetic changes in the bone marrow that occur in the course of life. Therefore, it is mainly older people who are affected. If left untreated, AML leads to death within a few weeks. But now there is hope. The combination of two drugs triples the survival time of patients with newly diagnosed AML. This was the result of an international clinical study with the participation of Professor Dr. Michael Heuser, Senior Physician at the Department of Haematology, Haemostaseology, Oncology and Stem Cell Transplantation at the Hannover Medical School (MHH), in which patients of the MHH clinic also took part. The results have been published in the New England Journal of Medicine, one of the world's most respected medical journals.

The drugs in question are Ivosidenib and Azacitidine, which have so far been used individually against AML. While the first inhibits a certain gene-modified enzyme called IDH1, which promotes the development of blood cancer cells, the second prevents the cancer cells from growing. "We already investigated the combination of both compounds in the mouse model a few years ago and observed significant synergistic effects," says Professor Heuser. In the clinical trial, the researchers were now also able to demonstrate this effect in humans who had newly diagnosed AML with gene alterations in the IDH1 enzyme. "We were surprised that the effect was so strong," emphasises the physician. The interaction of the two active substances causes a complete braking of the division cycle of the cancer cells and leads to a strong decrease in leukaemia activity. As a result, patients survive three times longer on average.

"The treatment is above all an opportunity for patients for whom intensive chemotherapy to fight the tumour is out of the question," says Professor Heuser. Another advantage is that undesirable side effects such as infections, pneumonia or blood poisoning occur less frequently than with other therapies. "The treatment does not simply kill the degenerated precursor cells of the blood system, but induces them to mature into white blood cells just as they do in healthy people," explains the haematologist. In this way, healthy blood cells can grow back and form a normally functioning immune system. So far, only the participants in the clinical trial have been able to benefit from the new treatment approach. This is now to change. "An application for approval of the combination therapy has been filed and will hopefully soon change the daily lives of AML sufferers and significantly improve their chances of survival."

The original paper "Ivosidenib and Azacitidine in IDH1-Mutated Acute Myeloid Leukemia" can be found here.

The publication on the investigations in the mouse model "Synergistic activity of IDH1 inhibitor BAY1436032 with azacitidine in IDH1 mutant acute myeloid leukemia" can be found here.