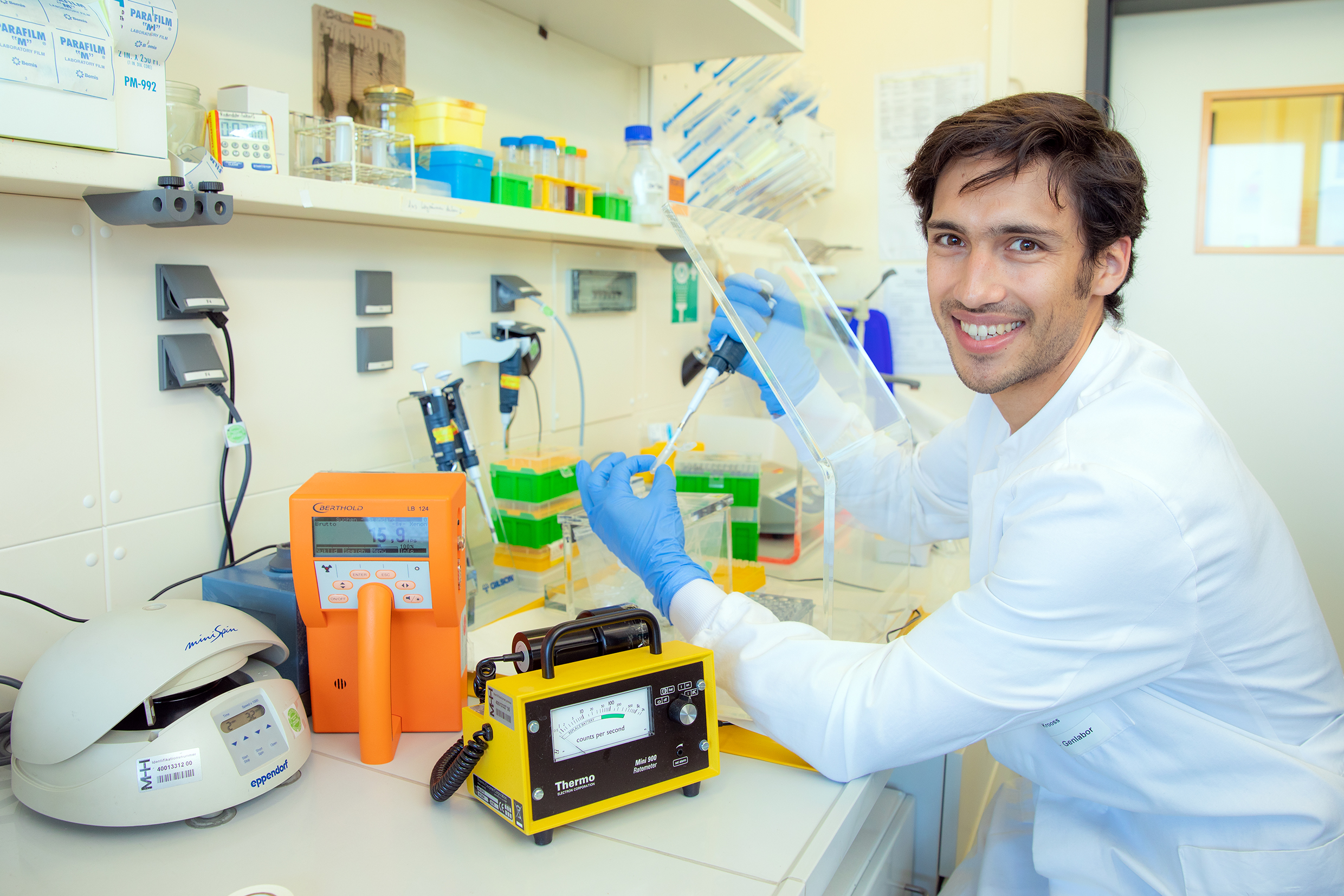 Dr. Simon Krooss pipetting in the laboratory at a radioactive workstation equipped with Geiger counters. With the help of the radioactive markers, the expression of genes in the samples can be traced; Copyright: Karin Kaiser / MHH.

Haemophilia A is a hereditary blood clotting disorder. About 4.000 people in Germany are affected. The so-called clotting factor VIII (FVIII) is disturbed or missing completely. When injured, the blood then clots more slowly, which can lead to chronic joint damage or acutely life-threatening situations. An already available gene therapy only helps certain patients who do not form antibodies against the viral vector, which acts as a gene carrier to introduce an intact copy of the FVIII gene into the body. Dr. Simon Krooss, a scientist at the Department of Gastroenterology, Hepatology and Endocrinology at the Hannover Medical School (MHH), has an idea for a new gene delivery agent that gets past the immune system undetected. For this, the biologist and future doctor is being honoured today with the "Bayer Hemophilia Award" in the basic research category. The funding amounts to around 60.000 euros.

Established gene therapy does not help everyone

Up to now, haemophilia A has been treated with the already established AAV gene therapy. Here, the protein envelope of the adeno-associated virus (AAV) is equipped with a functional copy of the FVIII gene. As a viral vector, AAV introduces the FVIII copy into liver cells, which can then produce the corresponding protein - clotting factor VIII. AAV vectors are often used as gene shuttles because they do not cause any diseases themselves and their genetic material is rarely incorporated non-specifically into the genome of the host cell. However, because our immune system usually recognises the actually harmless virus as foreign, it can form antibodies against the gene shuttle and thus prevent the desired treatment success. The research team led by Dr. Simon Krooss therefore wants to develop a new means of transport that does not trigger the immune defence system. To do this, he wants to use the new lipid nanoparticle technology.

Nanoparticles are much smaller than 100 nanometres, i.e. smaller than 100 millionths of a millimetre. By comparison, a human hair is about 70,000 nanometres thick. The tiny particles are easily absorbed into body cells, making them well-suited as transport vehicles. "These particles can package the FVIII gene and transport it to the liver," says Dr Krooss. Because they have a similar structure to fat droplets from natural fat metabolism, the immune system does not recognise them as foreign. "Thus, all patients could be treated with them, regardless of previously formed antibodies," explains the biomedical scientist. The scientist hopes to achieve lasting therapeutic success in the long term with one or at least a few injections. The funding award now gives him the opportunity to pursue his research approach further and offer a promising alternative to AAV gene therapy.