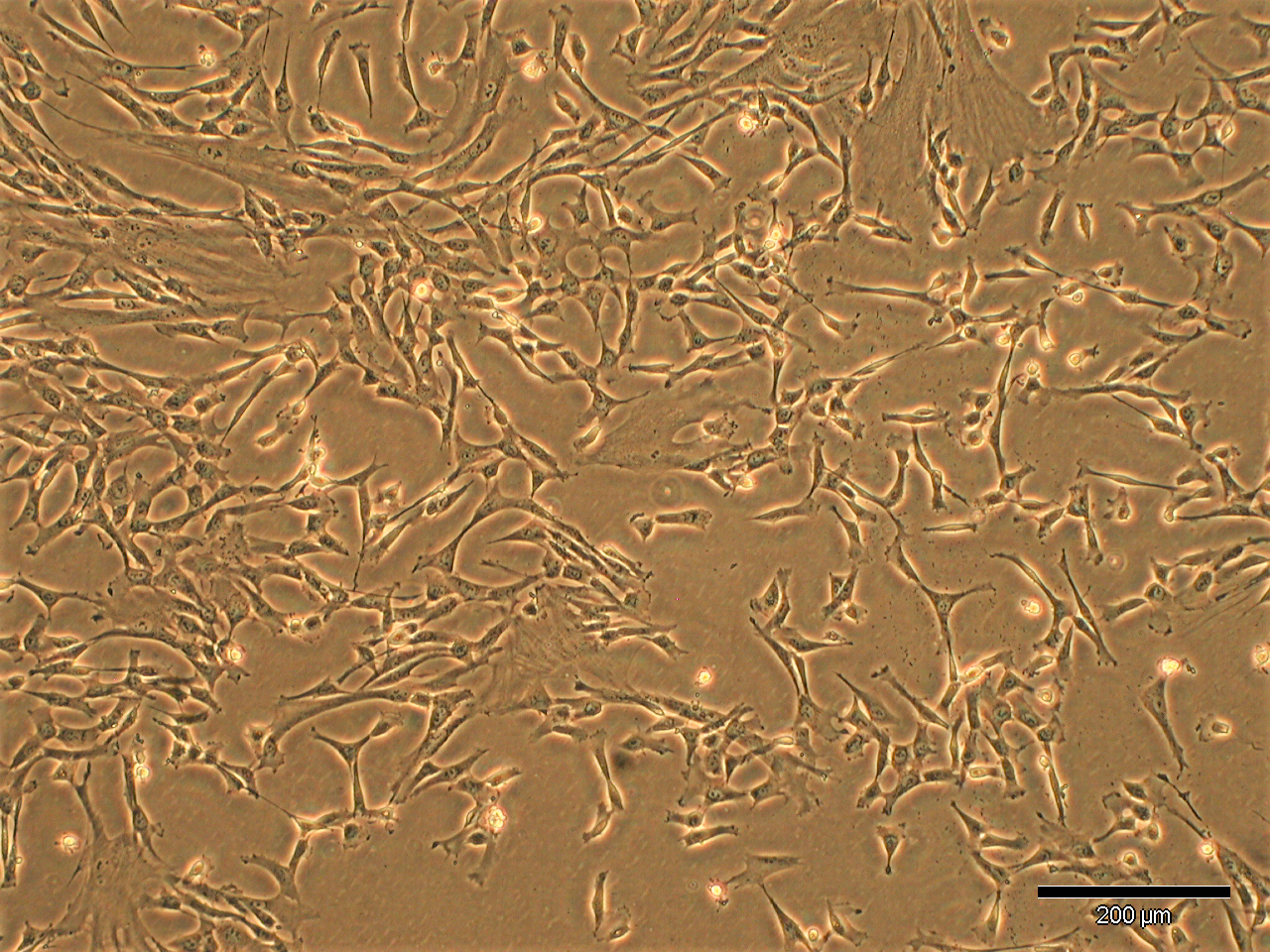 A microscopic image of the cultured human mesenchymal stem cells from the donor umbilical cord, whose stem cell products in conditioned medium were used for this therapeutic approach; photo: Ralf Hass, MHH Department of Gynaecology and Obstetrics.

Clinical researchers at Hannover Medical School (MHH) have succeeded for the first time worldwide in stopping the usually fatal course of the disease in severe pulmonary hypertension thanks to a novel therapeutic approach. A three-year-old girl suffering from so-called pulmonary arterial hypertension (PAH) was treated for six months a total of five times with mesenchymal stem cell products obtained from a human umbilical cord. "The treatment led to a significant improvement in growth, exercise tolerance and clinical cardiovascular variables and reduced the number of plasma markers in the blood that can be detected in vascular constriction and inflammation," says Professor Dr Georg Hansmann, head of the Translational Cardiopulmonary Biomedicine research group, and lead attending physician in the Department of Paediatric Cardiology and Intensive Care Medicine. After six months, not only was there a clear improvement in health, but there were also no undesirable side effects.

This is the first time there is a therapy for people suffering from pronounced forms of pulmonary hypertension. "Further studies are needed to confirm and explore the benefits of this new stem cell therapy," Professor Hansmann emphasises. The renowned journal "Nature Cardiovascular Research" reports on the success in its latest issue.

PAH is a disease in which the blood pressure in the pulmonary circulation is chronically elevated - hence the name pulmonary hypertension. The cause of the high pressure is usually narrowed lung vessels and/or a loss of these vessels. The disease is progressive and usually fatal. In advanced stages, PAH is considered non-curable. The currently approved PAH drugs are mainly aimed at vasodilatation.

Repetitive mesenchymal stem cell therapy is based on cells from the umbilical cord of newborns and is also called HUCMSC (human umbilical cord mesenchymal stem cell). The researchers' analyses showed that the products of these stem cells from the umbilical cord were able to improve regeneration in the damaged blood vessels, inhibit inflammation of the blood vessels and curb damage to certain parts of the cells. "We have evidence that this HUCMSC-derived therapy had multiple beneficial effects:  in the heart of the treated patients, it mainly protected the energy-providing mitochondria, and in the lungs the treatment mainly inhibited inflammation and stimulated regeneration," explains Professor Hansmann, "We can show that the proteins, lipids and prostaglandin E2 are enriched in the stem cells and its products, and that MSC-derived therapy modulate several key signalling pathways of PAH at once."

The new therapeutic approach now published was made possible via a collaboration between Professor Hansmann and Professor Dr Ralf Hass from the Department of Gynaecology and Obstretics at MHH. A very large team of scientists, researchers and doctors helped to implement this "individual healing experiment". Professor Hansmann infused the conditioned medium of the mesenchymal stem cells thus generated directly into the pulmonary arteries twice in the cardiac catherlab and three times via a central body vein.

Further so-called omics analyses of the stem cells and their products from multiple umbilcal cords were carried out by Professor Hansmann's research group as well as by collaboration partners at the University of Leiden (NL) and the Charité Berlin. Professor Hansmann came up with the new therapeutic approach for PAH through preliminary experiments with animal mesenchymal stem cells, which he had conducted in 2011 and 2012 at Harvard Medical School in Boston, but also through in vivo experiments conducted by his research group at MHH - and ultimately through the request of the parents.

Professor Hass' research group from the Department of Gynaecology and Obstetrics has been working on mesenchymal stem cells for years and has published on their special regenerative properties and effects in damaged and pathophysiological tissues. Using a special technology, Professor Hass was able to isolate mesenchymal stem cells from umbilical cord tissue and multiply them sufficiently in cell culture so that they could then be used for therapy.

The team assumes that such a therapy must be repeated at regular intervals in order to be successful longterm, in the case of chronically progressive, often therapy-resistant pulmonary arterial hypertension (PAH).