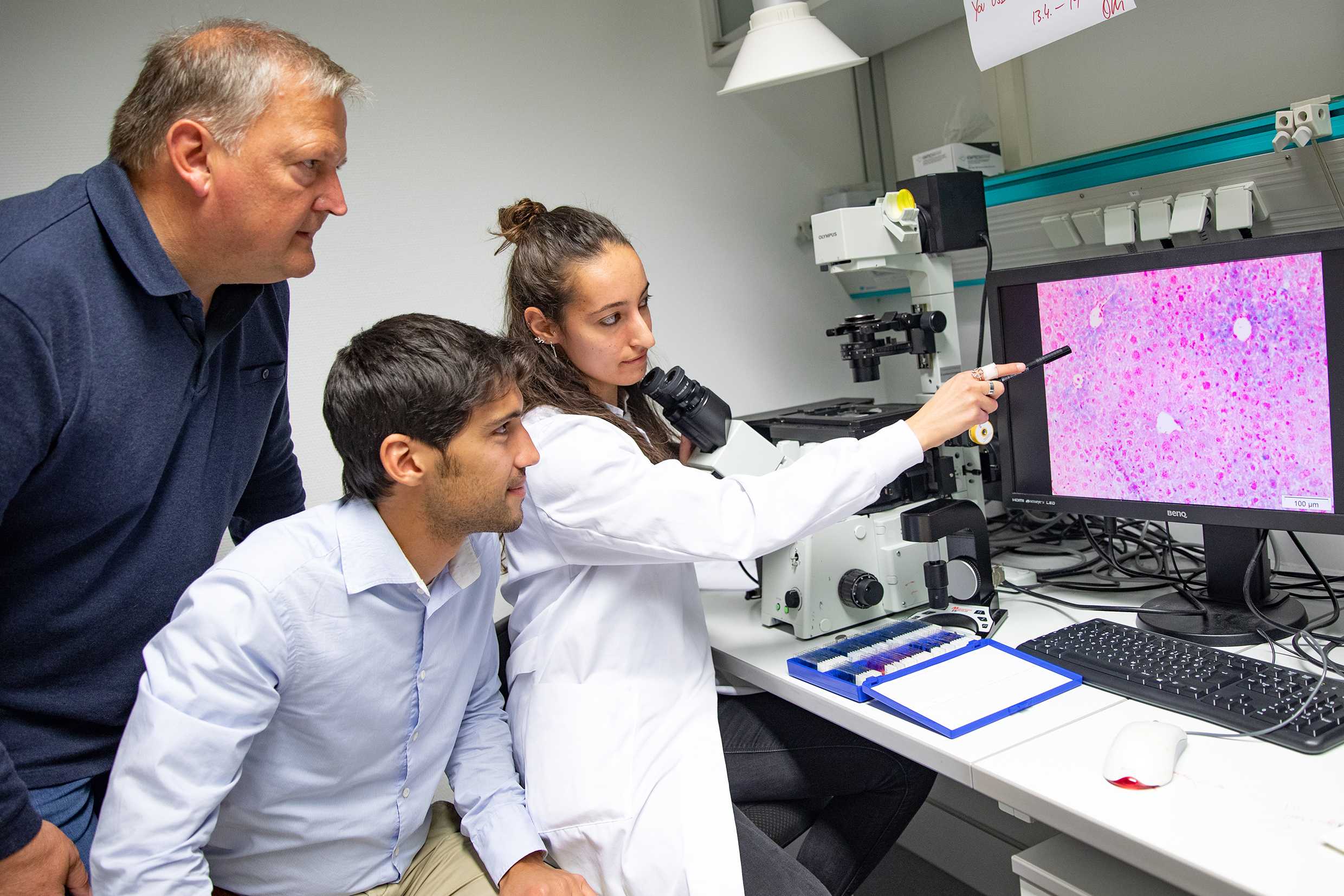 Hereditary primary haemochromatosis is one of the most common inborn errors of metabolism in Europe. In this disorder, also known as iron storage disease, the body is overloaded with iron. The excess iron accumulates in organs and tissues and leads to slowly progressive damage to the liver, heart, pancreas, pituitary gland and joints. This can lead to changes in the heart muscle (cardiomyopathies) or diabetes mellitus, and even to scarring of the liver tissue (liver cirrhosis) and liver cancer. The cause is a genetic defect that disrupts the regulation of iron absorption via the mucous membrane of the small intestine. A research team led by Professor Dr. Michael Ott and Dr. Simon Krooss from the Department of Gastroenterology, Hepatology and Endocrinology at the Hannover Medical School (MHH) has now found a way to treat the hereditary disease with the help of targeted gene correction. The work has been published in the renowned journal Nature Communications.

"In most cases, iron storage disease is due to a defect in the haemochromatosis gene HFE, which is located on chromosome 6," says Professor Ott. It only occurs in people who have inherited this defect from both parents, i.e. who do not have a "healthy" gene to compensate. In more than 80 percent of those affected, a certain change, called the C282Y mutation, is found in both copies of the HFE gene. This leads to the replacement of an amino acid - i.e. a protein building block - in the HFE protein. As a result, the HFE protein loses its ability to control iron absorption into the intestinal cells. In order to empty the iron stores and normalise the iron concentration in the body, patients have to accept lifelong phlebotomies. "This is stressful and, moreover, does not work for everyone," the hepatologist points out. Drugs that bind the iron directly in the body and thus neutralise it are also not ideal because of strong side effects.

The MHH researchers are therefore pursuing a different approach. They use the body's own repair mechanisms to repair the defective HFE gene. With the help of CRISPR/Cas technology, known as "gene scissors", and an accompanying biotechnological tool, they have specifically altered a tiny faulty building block in the mutated HFE gene. In technical jargon, the procedure is called base editing. The special feature of this gene repair: the gene scissors were used in such a way that they did not simply cut the DNA double strand completely at the desired position as in the classical application. "The double strand break always carries a certain risk of unwanted mutations," says the doctor and scientist. With base editing, on the other hand, the two single strands are detached from each other and only one of them is changed. "As a result, the cell automatically starts its natural repair programme and incorporates the correct nucleotide in the second strand as well, so that the C282Y mutation disappears in the entire double strand," explains Dr Krooss.

The research team investigated this biotechnological trick in the mouse model. With a single injection, the rate of gene correction was twelve percent. "This is a great success, because most genetic diseases can already be controlled if five percent of the cells have the correct gene," emphasises Dr. Alice Rovai, first author of the study. The iron levels in the blood had already dropped significantly four months after the intervention. In addition, the researchers expect to see a further reduction in iron levels after twelve months. "The repair system is sluggish, so it takes time for more liver cells to make the gene correction."

But the research team wants more. So far, they have packaged the CRISPR/Cas system with the molecular tool in a so-called viral vector - also known as a gene taxi - and administered it by injection into mice. In a next step, the researchers want to try to send only the mRNA blueprint for the base editing system - similar to the mRNA vaccines against the SARS-CoV-2 coronavirus. "This is safer and more efficient because we can do without the viral vector, and possibly increases the success rate to 30 to 40 per cent," Dr. Krooss hopes. If this succeeds and the application then also works in humans, a single injection could in future save people suffering severely from haemochromatosis from liver cancer and organ removal. "Injection instead of transplantation", says liver researcher Ott. In addition, base editing could be a therapeutic option for many congenital diseases whose cause is a single defective gene.

The original paper "In vivo base editing reverts C282Y and improves iron metabolism in hemochromatosis mice" can be found here.