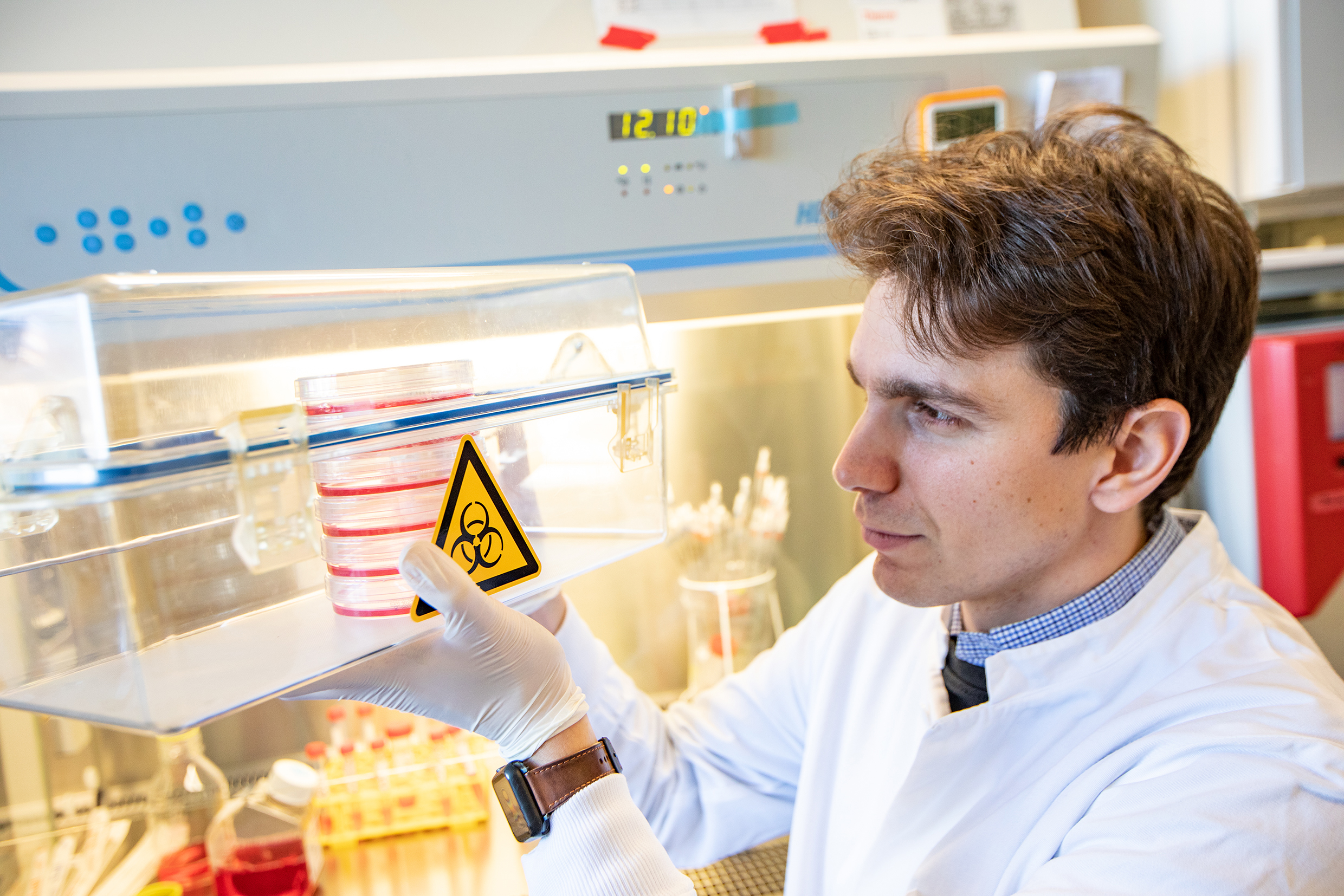 The young scientist Philippe Vollmer Barbosa with cell cultures for the production of the virus vectors that are to bring the drug into the lung cells as a gene taxi ; Copyright: Karin Kaiser / MHH

Viruses are a major problem for human health worldwide - and not just since the outbreak of the SARS-CoV2 pandemic. Despite successful vaccine development, there are still no effective drugs for most viral diseases. This should change as quickly as possible. With the project "iGUARD (integrated Guided Ultrafast Antiviral RNAi Drug development)", a research team led by Professor Dr. Dr. Axel Schambach, head of the Institute for Experimental Haematology at the Hannover Medical School (MHH), in cooperation with the Fraunhofer Institute for Toxicology and Experimental Medicine ITEM, aims to develop RNA-based active substances to combat viral diseases that can adapt particularly quickly to different viruses and thus provide protection against emerging infectious diseases. The project prevailed among 45 applicants in a Europe-wide research competition together with eight other projects and is being supported by the Federal Agency for Leap Innovations with 700,000 euros initially for one year.

The research team is focusing on the parainfluenza virus, which attacks the lower respiratory tract and triggers flu-like symptoms, especially in children and people with weakened immune systems. The goal is to prevent the virus from multiplying and spreading in the body. The research team hopes to achieve this with the help of so-called RNA interference (RNAi). RNAi uses a natural mechanism in the cell to specifically switch off individual building instructions for proteins - the so-called messenger RNAs (mRNAs). However, the RNAi system can also be used to block foreign mRNAs. In the case of a viral infection, the body forms short RNA snippets that bind to the appropriate site of the mRNA like a Lego brick, thus rendering it unreadable and initiating its degradation. The result: the genetic blueprint packed into it is not implemented and virus replication is blocked. "We want to use this mechanism to develop suitable RNAi building blocks that specifically paralyse sections of the parainfluenza virus genome," explains Philippe Vollmer Barbosa, research associate at the Institute of Experimental Hematology and in the Department of Preclinical Pharmacology and Toxicology at Fraunhofer ITEM.

Development process of a drug candidate shortened to a few weeks

"RNAi technology uses molecular methods to target the Achilles' heel of viruses, so to speak," says Professor Schambach. To find suitable RNAi candidates, the research team uses artificial intelligence. The so-called in-silico design is to detect suitable target structures in the virus from gene databases and select suitable targets for RNAi. "In doing so, we are mainly looking for so-called conserved regions that are indispensable for the virus and are therefore unlikely to change, so that no resistance can develop," the scientist notes. Such a search usually takes several months, sometimes even years. With the help of a self-constructed development pipeline, the entire process should now be shortened to eight weeks.

By gene taxi into the target cell

The RNA therapeutic agent is not to be administered by injection or as a tablet, but inhaled and thus brought directly into the lower respiratory tract with as few side effects as possible. A harmless viral vector acts as a gene taxi to ensure that the therapeutic RNA is delivered directly to the target cell in the lungs that is affected by the virus. The efficacy of the drug is being tested on human lung tissue sections as well as in 3-D cell cultures from human lung epithelium. "If all this works, we will be able to use our iGUARD platform to construct appropriate therapeutics for other virus types and also quickly adapt the drugs to emerging viral diseases," Professor Schambach is convinced. Drugs for lung diseases such as fibrosis, asthma or lung cancer could also be developed in this way.

The iGUARD project is a cooperation between the MHH Institute for Experimental Haematology (Professor Dr. Dr. Axel Schambach), the MHH Clinic for Haematology, Haemostaseology, Oncology and Stem Cell Transplantation (Dr. Dr. Adrian Schwarzer) and the Department of Preclinical Pharmacology and Toxicology at Fraunhofer ITEM (Professor Dr. Armin Braun). After one year, the team can apply for a second round of funding.