How healthy lungs develop in children

MHH research group compares bacterial colonisation of the lungs in children with mucoviscidosis and healthy children for the first time. 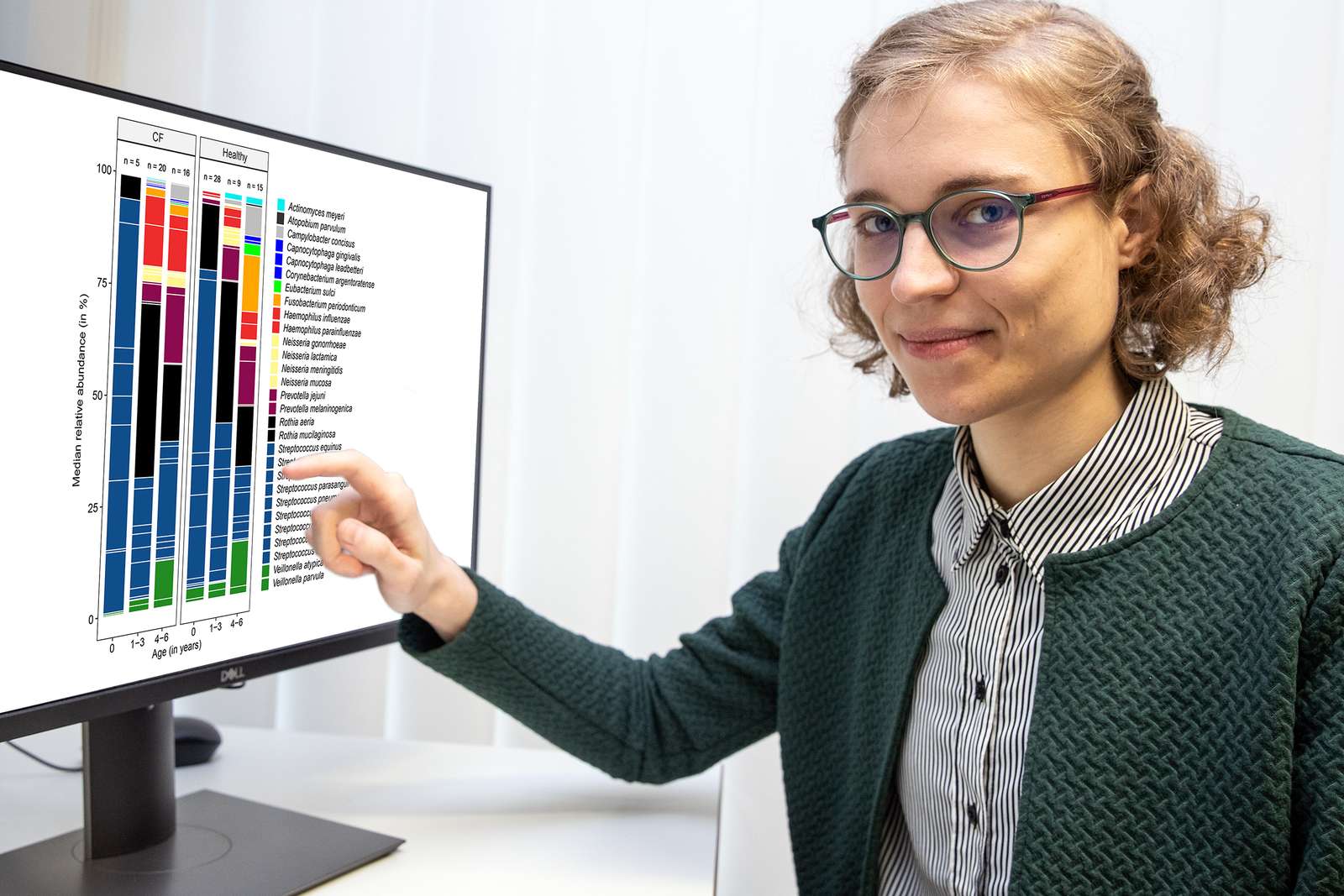 The first author of the study Marie-Madlen Pust with a representation of the diverse bacterial colonisation of the lungs of children with cystic fibrosis and healthy children; Copyright: Karin Kaiser / MHH

On average, a human being consists of about 30 trillion body cells - and just as many bacteria. Without them, we would not be able to live. Not only in the intestine, on our skin or in the stomach do microorganisms perform important tasks. The lungs also have a microbiome, a community of bacteria, viruses and fungi that is indispensable for the function of the organ. A research team led by Professor Dr. Dr. Burkhard Tümmler, head of the research group Molecular Pathology of Cystic Fibrosis at the Clinic for Paediatric Pneumology, Allergology and Neonatology at the Hannover Medical School (MHH), has now investigated the composition of the lung flora in infants and toddlers with and without cystic fibrosis (mucoviscidosis) and found out how a healthy microbiome of the lower respiratory tract develops. The study was published in the renowned journal Biofilms and Microbiomes.

"Until recently, the human lower respiratory tract was considered sterile," explains Professor Tümmler. Therefore, most studies had only examined the microbiology of the lungs in acute infections or chronic lung diseases. "In our work, we collected cough swabs from healthy children aged three weeks to six years for the first time, tested them for the microorganisms present and compared them with those from cystic fibrosis sufferers of the same age," explains the research group leader. For this, the scientists had to overcome various obstacles. One particular challenge was the quality of the samples. After all, bacteria, viruses and fungi are everywhere in the air and water. "In order not to accidentally contaminate the samples with foreign organisms, we had to be extremely careful when taking and processing them," emphasises Marie-Madlen Pust, PhD student in the research group and first author of the study. Another difficulty was to filter out the DNA of the many different microorganism species from each individual swab and to assign it correctly. "The respective secretion samples contained only a few billionths of a gram of genetic material and about 90 per cent of that came from the children and only ten per cent from the microorganism community," explains the junior scientist. For the analysis, MHH bioinformaticians developed a so-called metagenome pipeline, read out the entire genetic material of the microbiome with the help of a sequencing machine and then reassigned the huge disordered DNA data set to the corresponding microorganisms using high-performance computing technology.

Healthy and sick children have the same lung microbiome at times

The scientists found that the lung biome of healthy and sick children hardly differed from each other during the first three years of life. "They had a very similar composition of different types of bacteria, which apparently interact with each other and form a kind of network," says the first author. Surprisingly, this also includes disease germs such as Staphylococcus aureus or the dreaded cystic fibrosis pathogen Pseudomonas aeruginosa, which occurs everywhere as an environmental germ - even in drinking water. In the first year of life, this network is somewhat more unstable in children with cystic fibrosis (CF), but there are hardly any differences in two- to three-year-olds. Only with increasing age does the microbiome change again in CF patients. The diversity of bacterial species decreases, the disease germs predominate and chronically settle in the lungs and the sensitive network breaks down. In healthy children, on the other hand, the network remains stable even though their lungs have a much higher bacterial load.

"Our study shows that the overall composition of the microbiome is crucial for healthy lungs," emphasises senior author Tümmler. This cohort of healthy children can be used as a comparative value for other studies in the future. "So far, only the findings of children with different diseases could be compared," explains the scientist. The study also gives a decisive indication for the treatment of cystic fibrosis: while the treatment of older CF patients is only possible to a limited extent, there is apparently a window of opportunity in young children to influence the biological processes in the lungs favourably for the further course of the disease.

The study was conducted in cooperation with the German Centre for Lung Research (DZL) at the Hannover site BREATH (Biomedical Research in End-stage and Obstructive Lung Disease Hannover) and the Central MHH Research Unit for Gene Sequencing GENOMICS. It was funded by the Collaborative Research Centre SFB 900 ("Microbial Persistence and its Control").