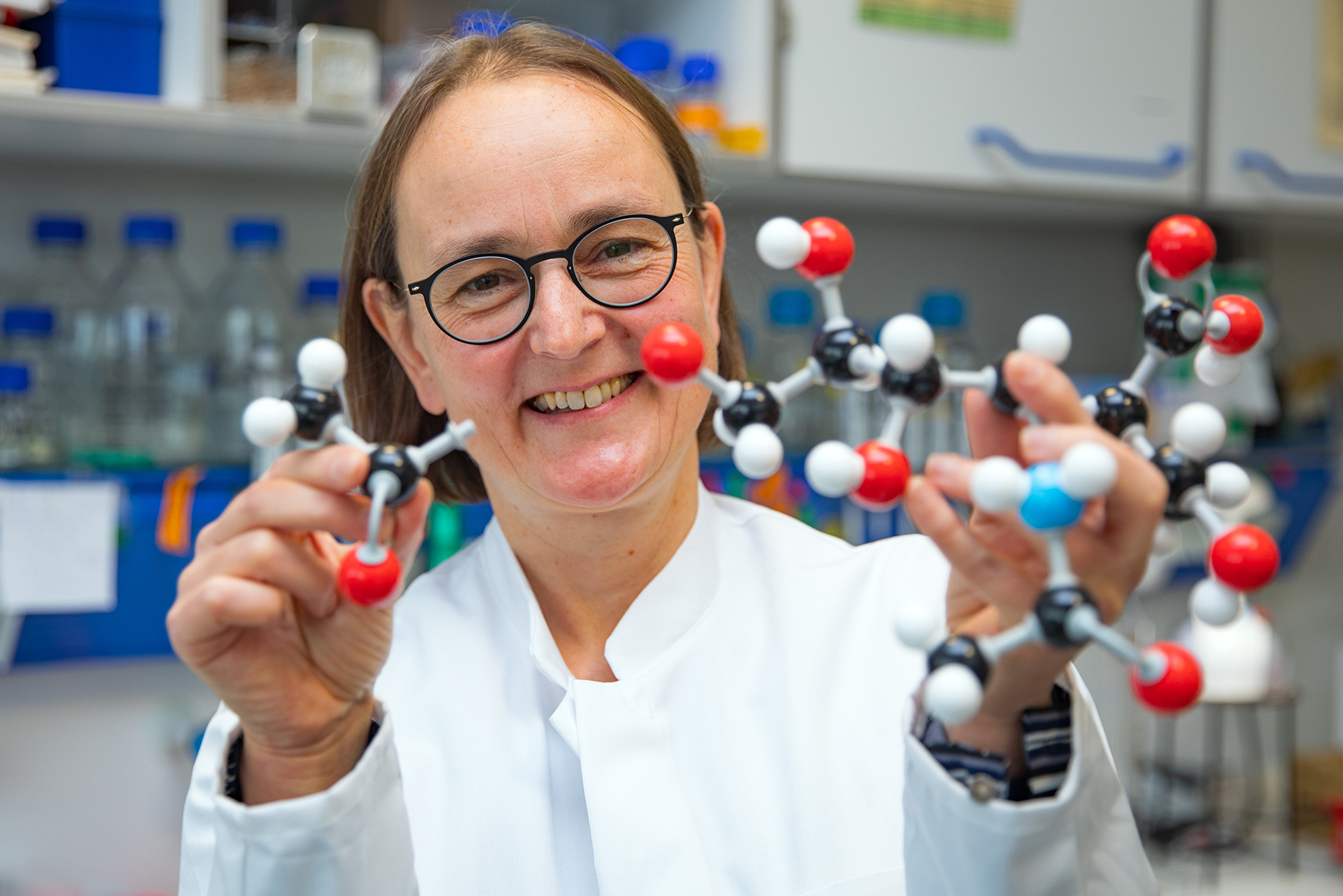 A small appendage can have a big effect: PD Dr. Martina Mühlenhoff with the molecular model of sialic acid and an acetyl group. Copyright: „Karin Kaiser / MHH“.

Sugar compounds from the glycan group play an important role in many biological processes in our body. By chemically combining with proteins and fats and thereby changing them, they regulate, for example, the maturation of the kidneys, the correct interconnection of nerve pathways in the brain or the function of the immune system. A research network of ten teams from Germany and Austria is working on the elucidation of these biochemical processes. The focus is on the group of so-called sialoglycans, which carry a sugar molecule called sialic acid. This plays an important role in many processes in immune defence and embryonic development. The research group FOR2953 "Sialic acid as a regulator in development and immunity" has already been supported by the German Research Foundation (DFG) since 2019 and will now receive follow-up funding of 4.6 million euros for another three years. The spokesperson is private lecturer (PD) Dr Martina Mühlenhoff, a scientist at the Institute of Clinical Biochemistry at Hannover Medical School (MHH). With about 2.4 million euros, more than half of the funding goes to the MHH.

Important for recognising the body's own cells

"Sialic acid is a very unusual sugar molecule," explains the biochemist. Thus, sialic acid helps the immune system to recognise the body's own cells - for a lifetime. An altered sialic acid pattern can lead to the immune defence no longer tolerating the body's own cells, but attacking them - which is the case in autoimmune diseases, for example. Sialic acid also plays a significant role in the regulation of immune cells of the brain and the protection of the embryo against blood proteins of the maternal defence system.

Thanks to the close collaboration within FOR2953, the researchers have now discovered in a mouse model that the antibody-producing B cells of the immune system cannot survive if they lack sialic acid. "The defence cells then receive the signal to go into programmed cell death and die," the scientist explains. Now the researchers want to go more in-depth and take a closer look at the different chemical variants of sialic acid. Small differences can have a big effect. PD Dr. Mühlenhoff is particularly interested in the so-called O-acetylation. Here, a small acetyl group attaches itself to an oxygen atom of the sialic acid and thereby chemically changes it. "This seemingly tiny modification can, for example, have the effect that certain viruses such as the influenza pathogens influenza A or influenza B can no longer recognise their host cells in the body," the biochemist notes. Other viruses, on the other hand, need precisely this small appendage to be able to attack body cells. "There are an incredible number of chemical variants of sialic acid in our body," says the scientist. "In addition, however, it is also crucial where exactly the sialic acid is linked to the glycan."

Using state-of-the-art analytical methods, the MHH research teams now want to uncover which different forms of sialic acid occur and which biochemical processes regulate them in detail. "For the first time, we now have the necessary tools to make the structures of the sialic acid variants visible and to study their function," notes PD Dr. Mühlenhoff. Thanks to these new findings, the DFG research group of biochemists, geneticists, immunologists and structural biologists would like to better understand how sialoglycans contribute to developmental disorders, pregnancy complications and autoimmune and age-related inflammatory diseases. "Only if we understand the processes better can we eventually treat the diseases better," the scientist emphasises.