New cells for the diseased heart 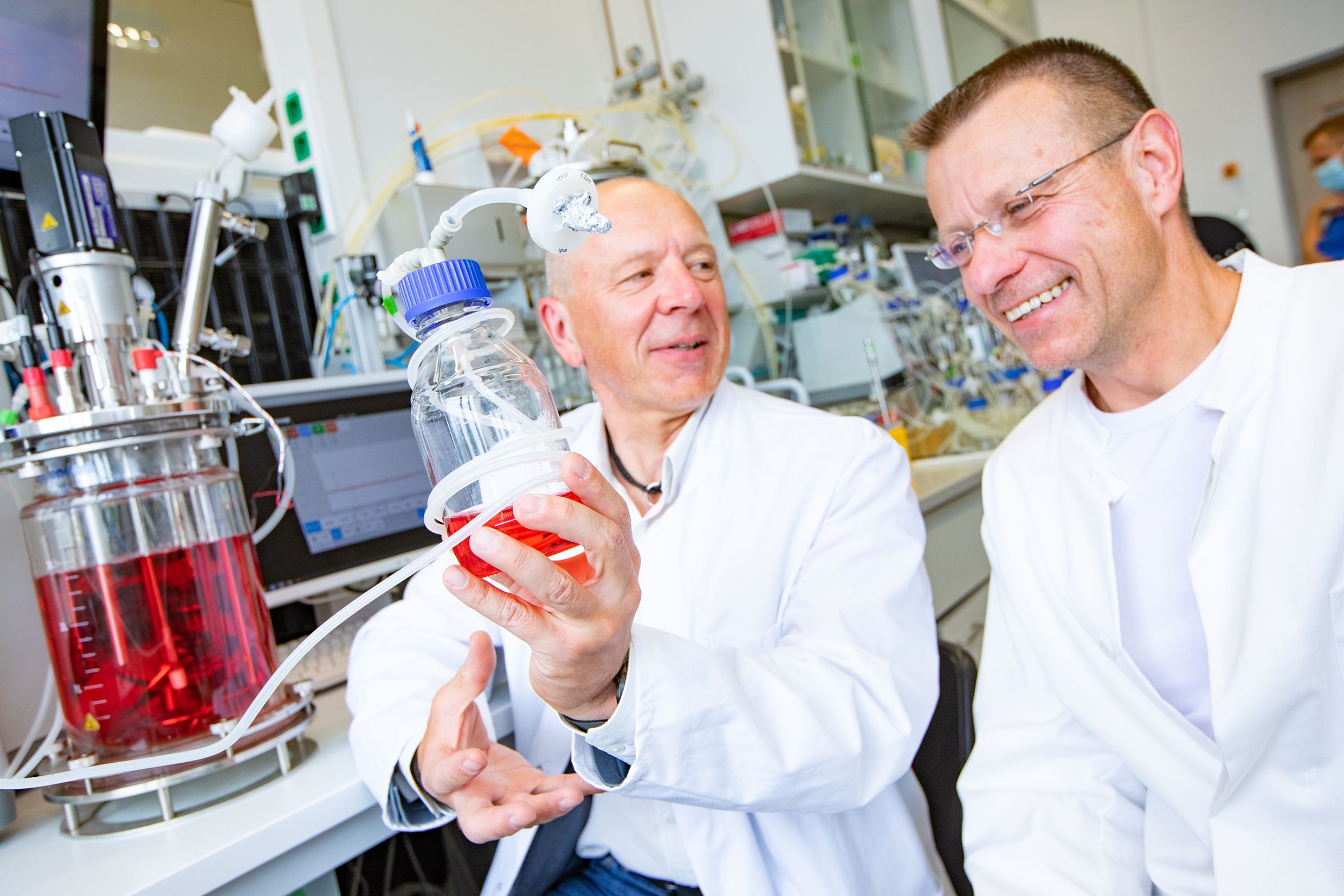 Chronic heart failure - also known as cardiac insufficiency in medicine - is the most common reason for hospital admissions and one of the most frequent causes of death in the western world. In Germany alone, four million people suffer from this disease. Often a heart attack precedes, as a consequence the heart muscle is no longer supplied with blood and thus oxygen and the organ is irrevocably damaged. An international research team led by Dr. Robert Zweigerdt, cell biologist at the Leibniz Research Laboratories for Biotechnology and Artificial Organs (LEBAO) at the Hannover Medical School (MHH) and LEBAO director Professor Dr. Ulrich Martin, now want to develop a new therapy in which damaged tissue areas can be repaired with the help of small cell clusters of biotechnologically produced heart muscle cells. The European Union is funding the HEAL project, which involves ten partners from all over Europe and Israel, with more than six million euros, of which the MHH as the coordinating institution is receiving 1.4 million euros.

In many heart diseases, blood vessels are damaged. As a result, the undersupplied heart muscle cells (cardiomyocytes) die. Scar tissue forms and heart function is impaired. Unlike in some amphibians and fish species, such damage is not repaired in an adult human heart. Scientists around the world are therefore working on strategies to replace destroyed heart tissue. One promising approach uses so-called induced pluripotent stem cells (iPS cells). These iPS cells can be produced in the laboratory from "reprogrammed" body cells of adults and can then give rise to any cell type of the human body - including heart muscle cells.

In addition to producing such cardiomyocytes from iPS cells in the clinically required quantity and quality, another major challenge is to get the cells into the heart in a way that they attach well and improve cardiac muscle function in harmony with the organ as a whole. One option is to inject the iPS cardiomyocytes directly into the damaged heart muscle. "The big disadvantage is that many cells are lost along the way and only a few survive and grow - especially if isolated cells are used," says Dr Zweigerdt. Another approach is to first produce a tissue construct from the heart muscle cells and then insert it surgically. However, this method can only treat tissue damage on the organ surface.

The HEAL research team is therefore pursuing a new strategy. "Although we also rely on iPS cardiomyocytes, we want to grow them into cell aggregates already during production in the laboratory," explains the scientist. In special bioreactors, large quantities of these spherical cell aggregates are to be produced, which will not be lost so quickly, will remain there better after injection into the heart tissue and should survive. "We can grow aggregates of different sizes as needed, but they are still small enough to be administered with an injection into the desired region of the heart," says Dr Zweigerdt. The researchers were already able to successfully prove that the cell clumps actually grow in the heart tissue and improve organ function in animal models as part of the iCARE project coordinated by Professor Martin. In the new research project HEAL, the strategies for producing and administering the iPS cardiomyocyte aggregates are now to be refined in such a way that they can also be used for heart therapy in humans.

This goal presents the HEAL team with very special challenges. On the one hand, the iPS cells must be adapted in such a way that the heart muscle cells produced from them cause as few defence reactions as possible after administration into the body, so that the immune system only has to be kept in check to a minor extent with drugs. Secondly, the cells must be particularly safe. "They must not trigger cardiac arrhythmias in the heart, nor must they degenerate into tumours," explains the cell biologist. The researchers want to investigate the possible side effect of arrhythmias in a large animal model, which reacts particularly sensitively to disturbances caused by the foreign cardiomyocytes. The researchers want to banish the danger of unwanted tumour formation with the help of a genetic trick. "We build a suicide gene into the iPS cells that can be activated if the applied cells degenerate in the body," says Professor Martin.

"In the end, we want to produce safe cell products that can also be produced on a large scale in extra-large bioreactors under sterile conditions in the clean room," says Dr Zweigerdt. The aim is to create the conditions now so that the new heart therapy can benefit as many patients as possible in the future. "This process has to meet the high standards required of a cell product for clinical use," emphasises Professor Martin. Regulatory authorities such as the Paul Ehrlich Institute are monitoring the four-year project. If everything goes as planned, the researchers hope, prerequisites for a clinical trial of cell-based heart repair in humans can subsequently be met.