Success story made in Hannover: 15,000 transplants at the MHH

Kidneys, livers, hearts and lungs are transplanted / Living kidney donation is the 15,000th transplant since 1968 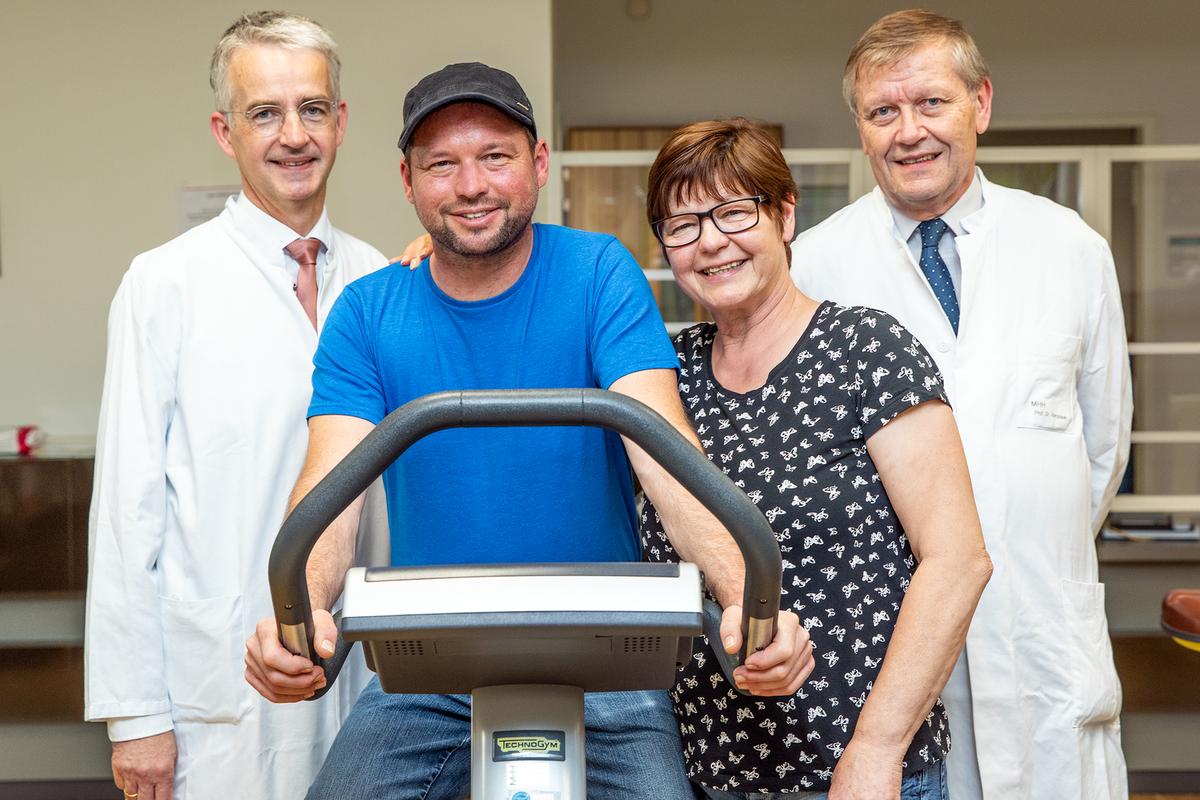 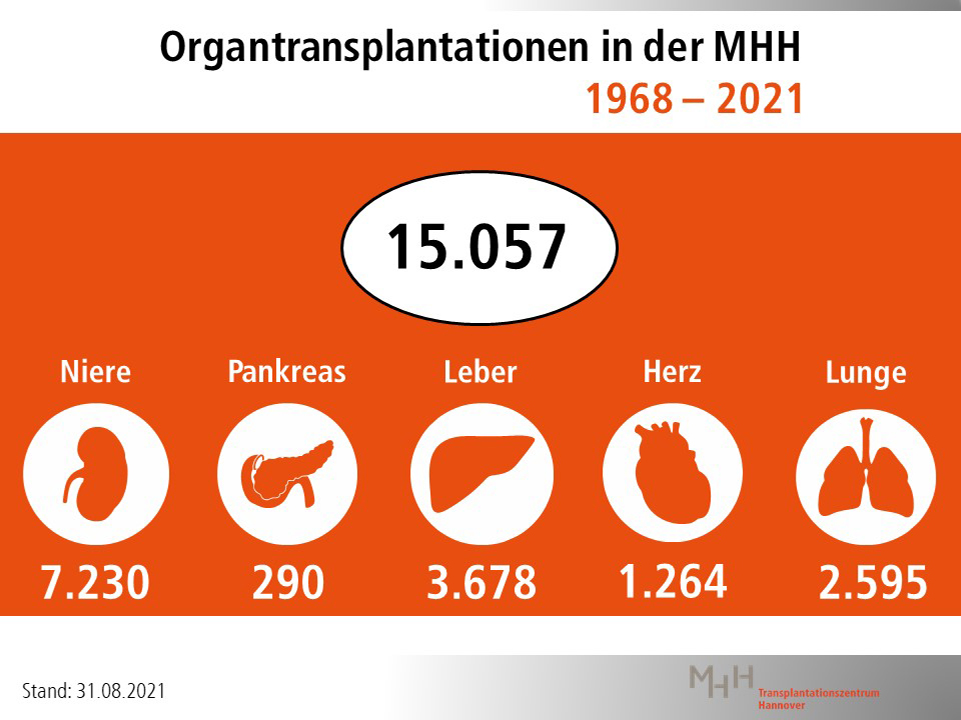 Hannover Medical School (MHH) is one of the largest transplant centers in Europe and, in the field of transplants in children and adolescents, one of the largest centers worldwide. In 1968, the success story began with the first kidney transplant. Now, MHH physicians have performed the 15,000th organ transplant. A 40-year-old patient received a kidney donated by his mother. "This proves the efficiency of the MHH," emphasizes MHH Vice President Professor Dr. Frank Lammert, responsible for the department of patient care. "At the MHH Transplant Center, interdisciplinary and interprofessional cooperation makes possible interventions that are unique nationwide." Transplant medicine at MHH was founded by Professor Dr. Rudolf Pichlmayr, who first established kidney and then liver transplantation. "Kidneys and livers now account for two-thirds of the organs transplanted at MHH," says his successor, Professor Dr. Jürgen Klempnauer, director of the MHH-Department for General, Visceral and Transplant Surgery.

"The big plus for patient care is both the close collaboration within MHH and the cross-sectoral cooperation in prevention, pre- and post-transplant care, as well as the rapid implementation of current research in patient care," says Professor Dr. Axel Haverich, head of the MHH-Transplant Center and director of the Department for Cardiothoracic, Transplant and Vascular Surgery. Numerous internationally acclaimed innovations have emanated from the MHH over the past 50 years. "In the past decades, we have built up a unique patient-oriented research infrastructure at MHH. The field of "Transplantation and Regeneration" is an established, internationally visible research focus of the MHH, which has been scientifically awarded, among other things, two Collaborative Research Centers of the German Research Foundation and a Cluster of Excellence," says Professor Dr. Michael Manns, President of the MHH and Board Member for Research and Teaching.

Transplantations are not financed to cover costs

"This competence is endangered by the current failure to cover the costs of financing cutting-edge university medicine," notes MHH Vice President Professor Lammert. Treatments in university hospitals, as in all hospitals, are reimbursed by health insurance companies via the so-called DRGs (Diagnosis Related Groups). Special university services and operations are not shown separately in these. For example, if a patient needs a heart and a kidney at the same time, only one of the two operations is adequately reimbursed. This endangers the future of university medicine as a whole and transplant medicine in particular.

Mother donates a kidney to her 40-year-old son

The 15,000th patient to receive an organ transplant at the MHH is Jens L. from Rehburg-Loccum. The 40-year-old metalworker received a kidney from his mother. Jens L. was born with malformations of the ureters. At the age of 18 months, the MHH pediatricians already operated on him twice. Even then, the doctors prepared the family for a possible transplant. Jens L. was doing relatively well before the transplant. He wanted to work until shortly before the operation. Two weeks before the operation, his kidney values deteriorated drastically and he had to go on dialysis for a short time.

His mother, Heike L., was the only donor in the family. But the blood groups of the donor and recipient did not match. Nevertheless, the doctors at the MHH-Department for Kidney and Hypertension Diseases, headed by Professor Dr. Hermann Haller, continued to plan the living donation. After all, blood group incompatibility is now no longer a hurdle to successful kidney transplantation. The MHH has already performed more than 100 such transplants. After the transplantation, a rejection reaction against the transplant occurred for a short time. However, this was successfully treated by the correct adjustment of the immune system-suppressing drugs (immunosuppressants) and the performance of several blood washes (plasmapheresis). "Living donation despite blood group incompatibility (AB0-incompatible) shortens the patient's waiting time for an organ as well as the time spent on dialysis, thus improving quality of life and life expectancy," explains Professor Klempnauer. In Germany, there are significantly more patients waiting for a kidney than there are donor organs available via deceased donation. The waiting time can be less than five, but also up to ten years. Patients who receive a living donation are cared for together at the MHH in the transplant outpatient clinics for internal medicine, surgery and pediatrics.

If you ask mother Heike L. what motivated her to donate her kidney, the 60-year-old answers, "Child always remains child. I had 40 years to prepare for it!" Her son Jens L., on the other hand, was initially somewhat hesitant to accept the donation. However: "My mother has a very engaging nature. No matter how old you are, as a child you have to listen to your mother," says the single father of two.

Despite COVID-19: No decline in organ donation and transplantation

Mother and son had presented themselves at the MHH in mid-2020 on the recommendation of a practicing physician from Hannover. Due to the Corona pandemic, the extensive preliminary examinations could not all take place immediately, so that the operation was now performed under optimal conditions. "Fortunately," as Heike L. finds, because this allowed both of them to be vaccinated against COVID-19 before the operation. "The COVID-19 pandemic had only a minor impact on transplants at MHH," says Professor Haverich. "We continued transplanting here at MHH and in Germany despite the Corona pandemic. Only living donation, as a deferrable procedure, we had suspended from April to early May 2020."

Transplants in 2019 and 2020: no slump during the Corona pandemic